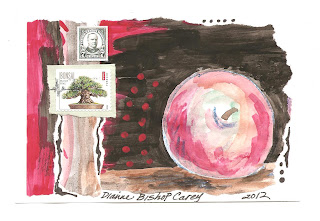 Decided to do a few
quick collages on 4x6 inch
index cards. 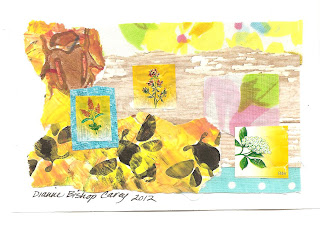 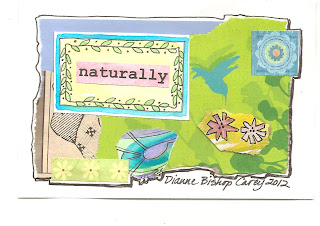 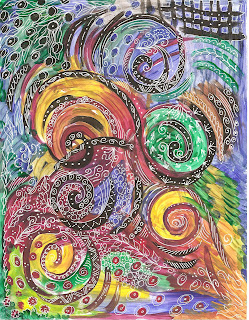 Tempera paint on typing paper--created
while my grandkids painted too.
Doodles added using Sakura
white Gelly Roll pen. Originally to be
torn up and used in collage, but
decided to paste it whole
into my art journal! 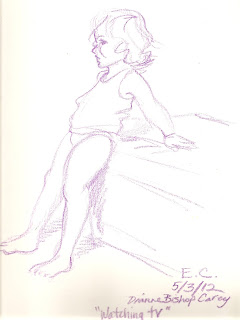 Sketch in purple crayon~
toddler watching television...
admit it, you would like to
watch tv in your underwear too!
(click to view larger image, hopefully
you can see it better) 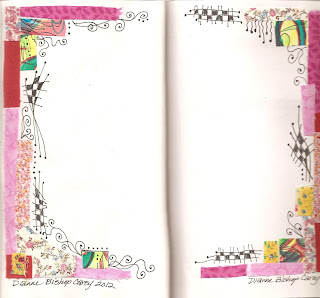 Collage borders from fabric, paper,
and drawings...waiting for writing
or more images. 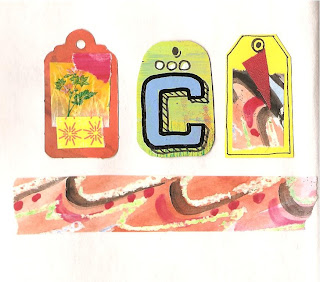 On journal pages that are filled
with hand-written notes, I like
to add a little color. These
are tags collaged at the bottom
of the page. 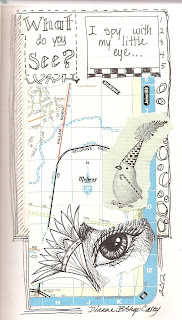 Collage from a map, doodles,
a stamped image salvaged from an
envelope, drawing and writing. 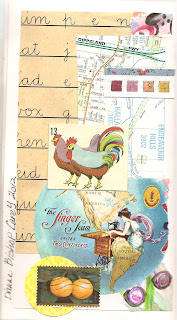 When I won a give-away over at
Christine Cemmonson's blog, she
sent me some wonderful ephemera.
The chickens are from her stash.
It is a good challenge to
combine unrelated images and
rather use them as Color, Shape,
Size and Value in the composition.

I have been wondering if I should
do the Index Card A Day challenge
over at Daisy Yellow again this year.
What do you think? 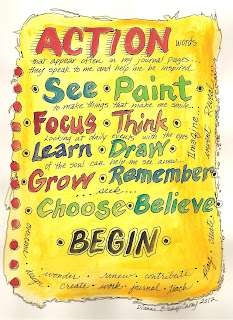 Visual journal pages continued
in my spiral mixed-media sketchbook
while I worked in the Fake Journal. 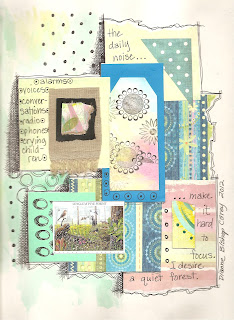 I tend to save small scraps, and often
put them in a plastic baggie to take along
with me. They are great to create journal pages
by just combining disparate scraps.
Then I often come back to the collage
later and add the written words
or more drawing. 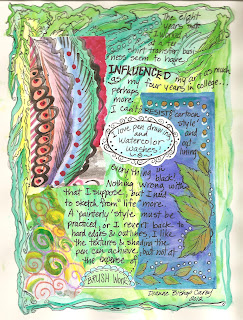 Watercolor, scrapbook paper, gouache,
Sharpie pen, and painted papers.
I made the little "journaling labels" myself,
using watercolor and pen.

What are the Action Words
that you use? 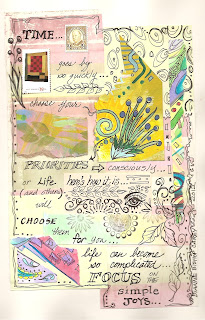 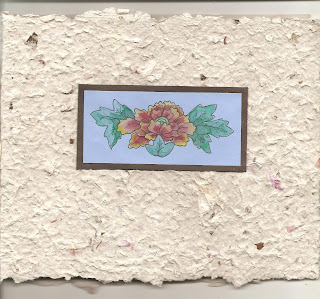 Cover of the Fake Journal~
made from handmade paper
created by my friend Elizabeth.

Inside the cover I wrote pertinent
information about the project, with
dates and credit to Roz as the
project creator.

My alter ego for the month was
a student of Japanese art.
I purposely didn't explain it
in my posts, but I believe it was fairly obvious
in my choice of subject matter and notes.
(My art journals & sketchbooks are filled
with notes about all sorts of art-related
things, I don't always show them here.)

My goals for the month were:
--to draw from life more often than I have been
--to simplify the compositions of the art
--more awareness of the negative space
around the subject
--to draw with a paintbrush
--explore Japanese philosophy of art 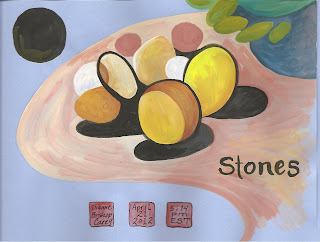 With the effort to simplify, came the idea
to progress to the abstraction of the subject itself.
The 'Stones', above, were my favorite
painting of all the entries in this Fake Journal.

With the idea of abstraction, came the
progression to 'anime' or cartoon-style art,
that is widely appreciated in popular culture.
But being a fan of Kandinsky, I knew that he
had painted abstractions of what looked
like 'little creatures,' so I decided to
include a painting inspired by his work.
The post showing these two pages is here.
Also, with the cartoon creatures, the idea
of a 'simple' composition was left behind,
but the creatures themselves are simplified. 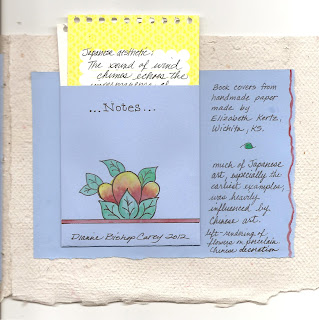 I did not really intend to create a story,
but there is a progression in my pages.
I did indeed draw with the brush more often than
I usually do, but also 'fell back on' my normal
watercolor & pen technique. I did paint and draw
from life. I did simplify somewhat, and that has
always been difficult for me. Complex collages
have been taking place in my other journals
all the while! I do have a renewed appreciation
for Asian art in all its forms, Wabi Sabi, and
nature in art.  What looks like a 'simple' composition
was probably a most difficult thing to achieve!

I confess that I didn't actually bind
the pages into a book until I had
completed the art work on each page.
It was much easier to scan unbound pages.
Additional blue Canson paper was
glued onto the inside of the
front and back covers. A pocket for
research notes, above, was adhered to
the inside back cover.

The Fake Journal could have been
anything, by anyone.  Think Dr. Who traveling
to another version of your own universe.
Wonder what I should do in 2013?

And this really is the end of the Fake Journal 2012.
I promise. 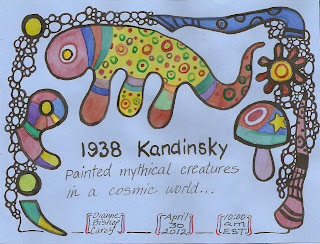 In 1938, Kandinsky painted
mythical creatures in a
cosmic world... 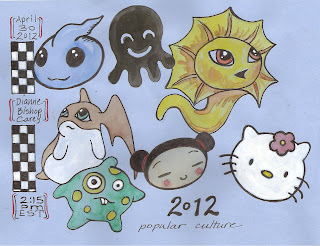 In 2012 popular culture,
we create mythic creatures in
a cyberspace universe...