April is the month each year that I
create a Fake Journal.  Four months have passed
and I'm just now getting around to posting
a Wrap Up of this year's project. 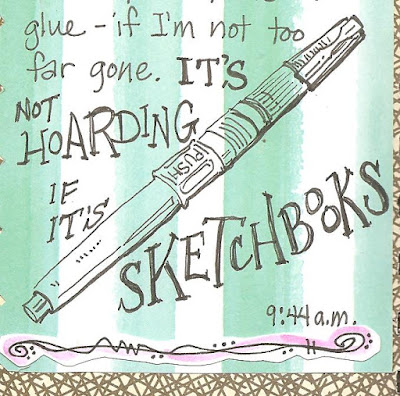 Stop by my Fake Journal blog,
Cottonwood Counterfeit Journal to see
all of the images from this year's Fake
Journal, and my thoughts on the process. 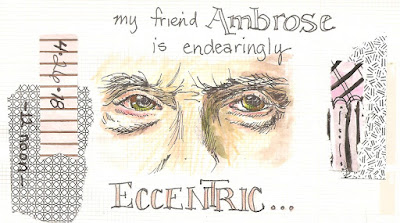 I think Eccentric is fun,
don't you?

Hobonichi:  A Japanese company specializing in
planners and accessories, which encourages their
customers to "Make it your Life Book."
Techo:  Japanese for 'planner'.
Collage: A composition or design made by arranging
and gluing materials to a background surface. 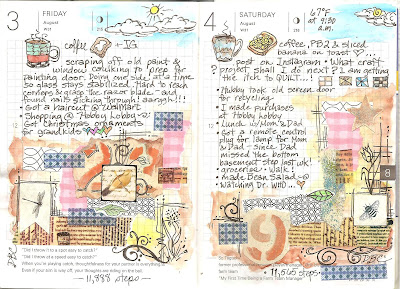 My Techo is the A6 size English planner, so it's
roughly 4 inches by 6 inches, and the quotes on
each two-day spread are translated into
English. They are not necessarily 'motivational
quotes' but rather quotations from books, and
are often quirky or amusing.

I challenged myself for the month of August
to create a collage each day. 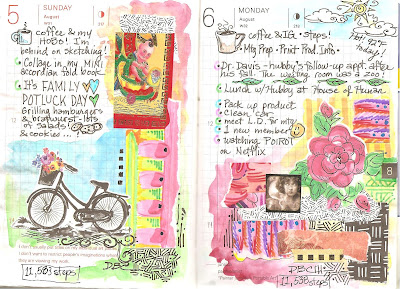 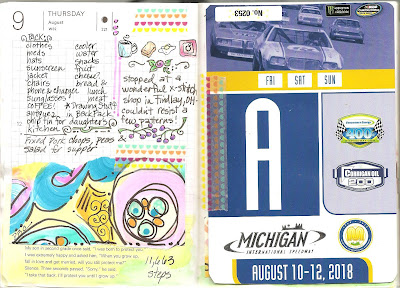 Our daughter asked us to volunteer at a Nascar
event, to benefit the Music Boosters at her school.
Hubby thought it sounded fun. Above, my pass for
the day. Our job was to help attendees on and off
of the Trams that went from the camping area to
the racetrack. We met lots of happy people from
many different places, including Canada, England,
Wisconsin, Michigan, and Ohio. 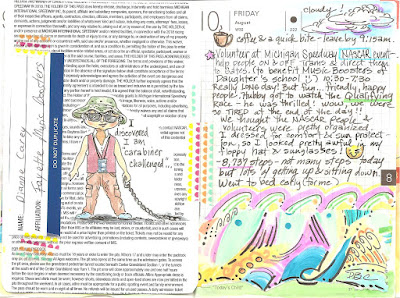 Since I dressed for sun protection and comfort,
my appearance that day was very odd, especially
with the addition of the red vest we were required
to wear!  (as my 'selfie' cartoon clearly shows)
The open-air Trams had chains or ropes
as 'guardrails' at the end of each row of seats,
fastened with caribiners.  I found that when you are
trying to be efficient and quick, that is when you
become the most clumsy at unfastening a
caribiner! (I don't think I will ever be a rock climber)
I had taken a backpack with drawing supplies,
but we were kept busy all day, so no chance
to sketch! 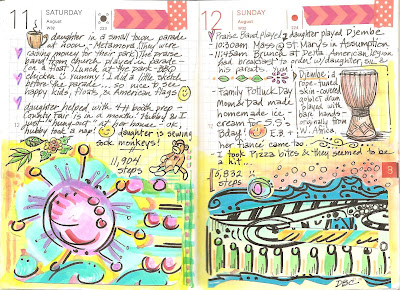 Always interesting times when we visit the daughter
and son-in-law.  Daughter plays in a praise band
at her church, and they also are 4-H advisers.
So we went to a small-town parade and a barbecue
fund-raiser on Saturday, and got details about
the planning for the 4-H booth at the Fulton
county fair.  I expect we will go to the tractor pull,
and I will try to do some sketching of the
animals again. Stay tuned... 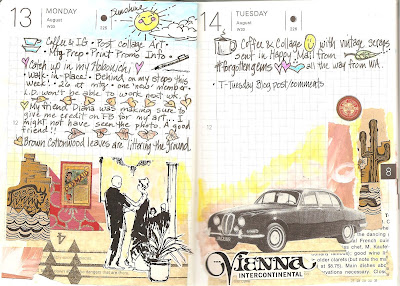 I recently exchanged some Happy Mail with someone
in Washington state, and received a lovely package
stuffed with vintage ephemera from
#forgottengems (on Instagram) The above collage
includes some of the goodies she sent.

Linking up for T Tuesday, where we share a
beverage related post with our hosts
Bleubeard and Elizabeth.  Last week there
were 10 coffee cups in my post (if you count the
one that was repeated a second time) but you
could actually have counted the magic potion
as a beverage too, making 11!

How many cups do you see this week? 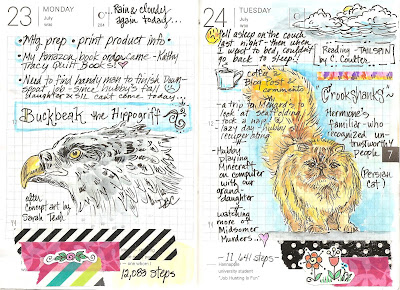 I rather hated to see the end of July arrive,
as I've enjoyed drawing Harry Potter characters
and creatures so much!  Top left, the Hippogriff:
a magical creature with the head and wings
of an eagle, and the body of a horse.
Top right, Hermione's familiar: this cat could recognize
untrustworthy people and creatures. (the model
was a Persian cat image online) 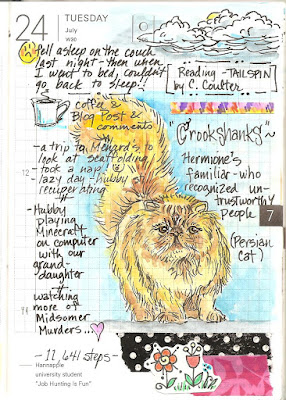 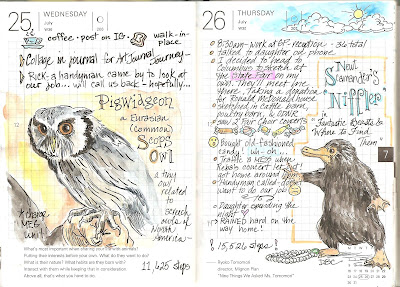 Hubby is doing much better after his fall off of
the ladder last week.  He still has some sore spots,
but at least the muscle spasms have mostly
subsided. He even went to the State Fair with my
daughter and I. He is a good sport, and puts
up with my sketching adventures...
and, our son drove all the way from Tennessee
to Ohio to help finish the dreaded "Gutter Project."
It was good to see him, and we are very
grateful for his help!

To fill in some information for those who haven't
read the Harry Potter books, the owls carried
wizard's messages, just like our mail, only way
more entertaining!  The Niffler is a magical
creature that is very fast and cunning,
but so cute. A Niffler will steal any shiny object,
especially jewelry, and is very difficult to
apprehend if allowed to escape. 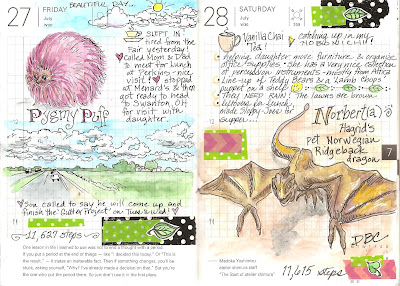 The Pygmy Puff was a magical creature that was
sold in the Weasley twins' joke shop. (It looks
suspiciously like the Tribble from Star Trek) I
don't remember if it had a function other than
being cute.  The baby dragon, which the Wizarding
School's gamekeeper hatched from an egg, was
pretty fierce even as a baby.  It kept setting
things on fire... 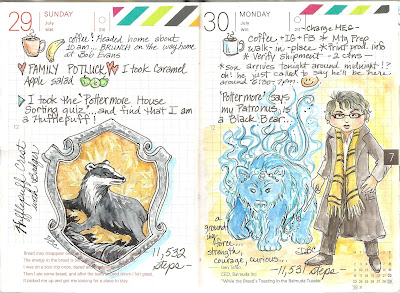 The popularity of Harry Potter's wizarding world
seems unabated, and you can even take a quiz
online to see which 'House' that you would be
in at Hogwarts School of Wizardry.  According
to the  Pottermore site (which has the approval
of the author, J.K. Rowling) it turns out
I would be in Hufflepuff.  Probably because I
value Trust and Loyalty very highly. (Plus I don't
see myself as highly brave, for Gryffindor!)
It's all in good fun, and hypothetical, of course.

The Patronus is an ethereal being conjured with
a very difficult, but powerful spell.  The Patronus
cast by each witch or wizard reflected the strengths
and personality of that wizard.  I think the description
compares with the Spirit Animals with
which each Native American identified.
I was surprised to be a black bear! 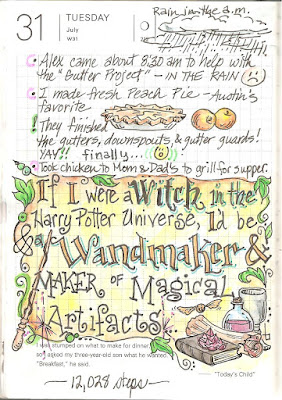 And on the last day of the month, the prompt
was to explain what wizarding career you would
have.  No fighting monsters or Dark Magic for me...
just let me make cool stuff!
I am a bit sad to see the end of July,
as it means... 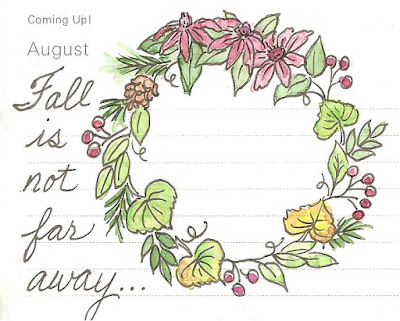 I didn't find any drawing challenges that struck
my fancy, so I guess I will just make collages. 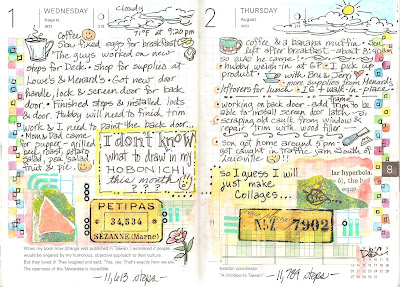 It will bulk up my journal and make it
chunky for sure!  Joining
Bleubeard and Elizabeth for T Tuesday,
for which I've drawn many coffee cups!
What are you drinking today?