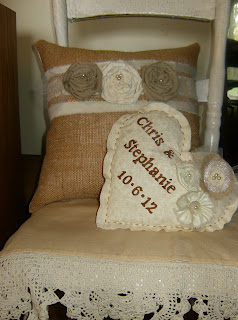 The further adventures of
wedding preparation.
Burlap and lace pillows... 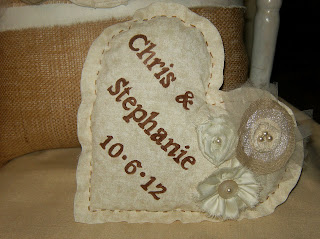 roses and various flowers made from
muslin, burlap, and assorted pearls
and scrap fabric.
Names painted on with acrylic paint. 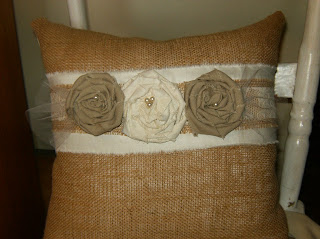 A 'chippy' white chair with
some soft pillows to brighten
a corner... 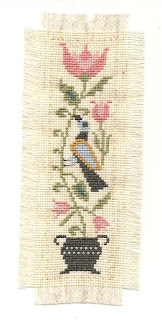 Cross stitch bookmarks make
a nice little gift slipped into a
card sent in the mail.  The
bird and urn, above, was a (free)
pattern from Prairie Schooler.
(Click on the image for a closer look.)
I often adapt the colors to what I
have on hand, rather than strictly
adhering to the 'pattern requirements.'
The unusual color combination of the
bird's plumage intrigued me however, so
I tried to make it similar to the pattern
guidelines. I also whip stitch several
squares beyond the embroidery, then
ravel several rows for the fringed border.

This flower pattern was done
on a scrap of Aida that really
was not wide enough. You can see
that there were only a couple of
squares outside the pattern after it was
worked. This is considered bad form when
stitching, but I simply couldn't throw out this
perfectly good scrap! So I blanket stitched
around the finished embroidery to keep it
from raveling, and put a felt backing on
which is also blanket stitched. Turned
out rather well, I think, for a 'scrap.'

This bookmark is actually embroidered
on paper. The lettering may seem a bit
'uneven,' but that is common in the lettering
of traditional cross-stitch samplers. The
cord at the bottom was created by twisting
six strands of floss until it is so tightly twisted
that it doubles back on itself and creates a 'cord.'

Finally, a bookmark cross-stitched
from a sampler border pattern.
The flowers are in 3 shades of pink:
dark, medium and light pink. Sampler
borders are ideal for the long slender
shape of a bookmark, and usually
work up quickly because of the
repeating pattern.

Quick little sewing projects make a
nice change when mixed media art
is not 'calling' to me... what other
crafts do you do? 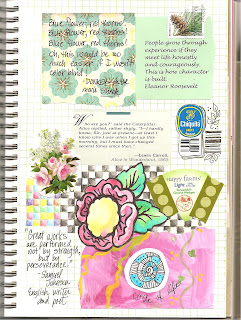 I have succumbed to the Smash Book
sold by K&Company.
I often make my own journals or
sketchbooks, but I was intrigued
by working on backgrounds created
by someone else. 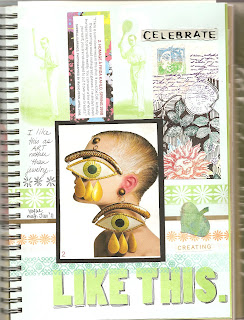 Since I didn't create the book and the
background myself, I am a little more free
about how I 'smash stuff in there.'
It doesn't have to be a finished
piece of art, but the collages and
designs still have to be pleasing
to the eye. 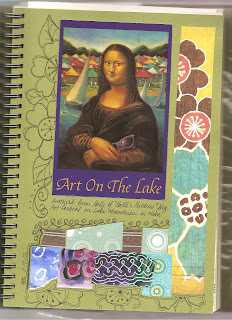 Gluing in lots of scraps of painted papers,
etc. Mona came from Halle--I love that
postcard! 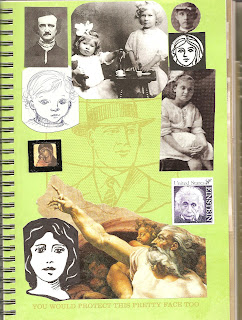 Can you tell which faces I drew?
(definitely not the one from the
Sistine Chapel!) 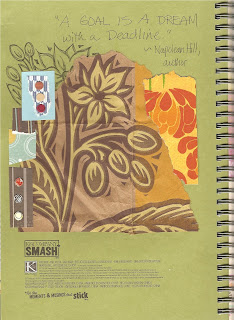 "A goal is a dream with a deadline."
~Napoleon Hill, author

On the final countdown to the October wedding.
It is less than a month away.
Table centerpieces made and boxed.
Putting stickers on candy bags.
Phone calls and emails flying.
My posts may be sporadic...
but I will be back.

Sketching at the Fair 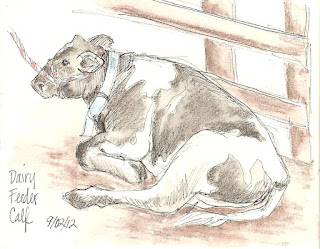 I spent some time sketching at
a county fair this week.

The Fulton County Fair is
one of the largest county fairs in Ohio.
With all the traditional arts and crafts exhibits,
animal barns, several ride and food midways,
and big name entertainment, it usually has
excellent attendance.  'Styx' was playing
at the grandstand the night we were there.

I spent an hour of my visit sketching
a few of the animal exhibits, as inspired
by Roz Stendahl of Roz Wound Up.  I
can't make it to the Minnesota State Fair,
but got a good taste of 'sketching
in public,' with minimal preparation and
not too much anxiety!

I think the 'dairy cow,' above, is
the best one of the four that I did.
Not sure if the head is large enough in
proportion to the body, but felt that I
did ok with it over all. 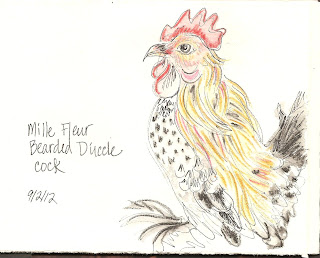 Roz sent me a lovely little sketchbook (pages
about 5"x6")  that she made and
it was a good size to sketch in while
standing up. I used a Sharpie pen and
watercolor pencils for these drawings. The
plumage on this little rooster was so beautiful,
but he simply moved around so much that I
had difficulty capturing him. He had those
great tufts of feathers on his feet (there's
probably a proper term for that but I don't know it)
and marvelous black and white feathers.
In retrospect, I wish that I had drawn just
a single feather detail to show how
one feather looked. Next year... 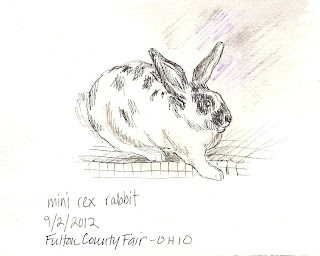 I first focused on the pen sketch, then added
bits of colored pencil in areas where I
wanted to add color or shading. I don't
own a 'water brush' so I thought this
would be an acceptable alternative.
I was able to place the little sketchbook
on top of the metal watercolor pencil box
as a drawing surface. I used water on the
pencil sketches when I got back to
a table and a glass of water. 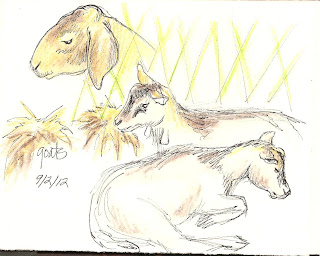 Some challenges and things I learned:

* Animals MOVE. A challenge in itself.  Even if you choose
a sleeping animal to sketch, fair goers may come along
and pet the animal and cause them to move.
I do not ever try to touch animals I don't know,
unless the owner is nearby and says it's ok.
Even 'little bunnies' can give you a serious
bite or painful scratch! Fair goers don't always
keep this in mind.

Sketching a moving subject can be a bit difficult for me.
Although, when the animal moves, you can sometimes
change your vantage point to compensate.
The cow was the least inclined to move, the rooster
the most active. (and he had a loud crow for a little guy!)
It was amusing though, that the animals were quite
aware that I was standing there longer than most.
The goats came looking for a 'snack' or a scratch
on the head. The cow turned its head and gave me
a questioning look like "what are you up to?"

*People may want to look at what you've drawn.  One
older couple told me the dairy cow was "pretty close."
I'll take that as a compliment. It's not always easy
to ignore interested passersby, or reply to their
comments. As an artist, it's easier for me to show
finished work rather than 'work in progress,' so that
was a thing out of my comfort zone. Though
attendance was good the day I was at
the fair, it wasn't so crowded as to
have people bump into me. That would have been
another challenge, but as long as I kept the drawing
'loose' it wouldn't be a huge problem for me.

*Drawing while standing is not a problem. Not having
a table or area to lay my tools was a learning experience.
Roz's suggestion is a Fanny Pack or lots of pockets.
I can see how cargo pants would be terrific to sketch in.
But I don't own cargo pants or a Fanny Pack. I do
own a back pack, but having to get it down off my
shoulder to get stuff out was awkward.  I found myself
sticking the watercolor pencils in my mouth while
sketching in pen. Probably not the best idea. I know.
But it served. Next time, I'll choose
clothes with more pockets. 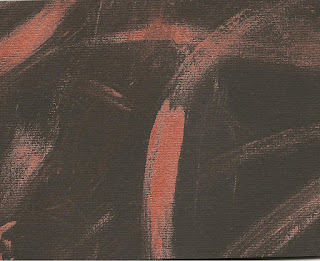 The hand made book from Roz, above, a gift for
participating in her 'Fake Journal' challenge.
The Strathmore 500 mixed media paper was
a wonderful paper to work on. The black cover has a
bit of sparkle with copper metallic paint brush strokes.

*The smaller sized sketchbook was easier to handle
than my larger spiral bound journals would have been.
A larger book would have been too heavy, and
difficult to hold in one hand while sketching
with the other hand.

*I'm allergic to most animals. And hay. And dust.
So I did wear jeans, steel toed boots and socks.
From experience, I know my ankles will break out
from the dust and animal dander, and this year was
no exception. Benadryl cream is helpful. I'll live.
I don't go visit the horse barn, though. Horses are quite
beautiful, but asthma is very unpleasant. I did take a
quick peak at the miniature horses getting lined up
in preparation for their show in the arena, but I didn't
stay long, or try to draw them.

I enjoyed my sketching experience. I only
sketched for about an hour.  With more time I could
have drawn pigs or flowers or people. There is a
wealth of subject matter at the fair!

Polymer clay embellishments in an altered book.  (This is a re-post of an altered book project from several years ago.) Since Elizabeth did a terrific tutorial on her blog Altered Book Lover, I was inspired to show this spread, which is one of the few times I've used polymer clay.

The button-shaped pieces of polymer clay were made from impressions of old buttons from my grandmother's button jar. The background is acrylic paint over gesso. Circles were stenciled on, flowers from tissue wrapping paper were applied in opposite corners, and hand-carved stamping in green acrylic was added. The clay buttons were also painted in acrylic, layering yellow, tan, and black to highlight the textures. Words were added in brown Sharpie marker...things that remind me of the month of August and the sweet days of the end of summer. 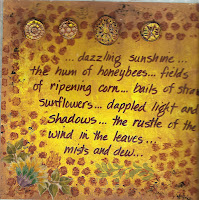