April is almost over...
Fake Me is almost done with
the Fake Journal 2018.
Stop by for a peek! 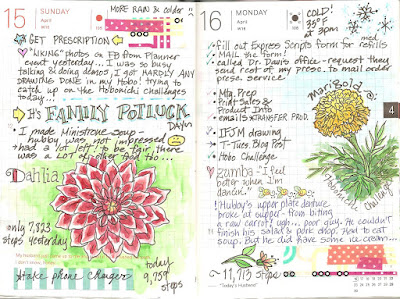 This dahlia flower was only penciled-in
last week... 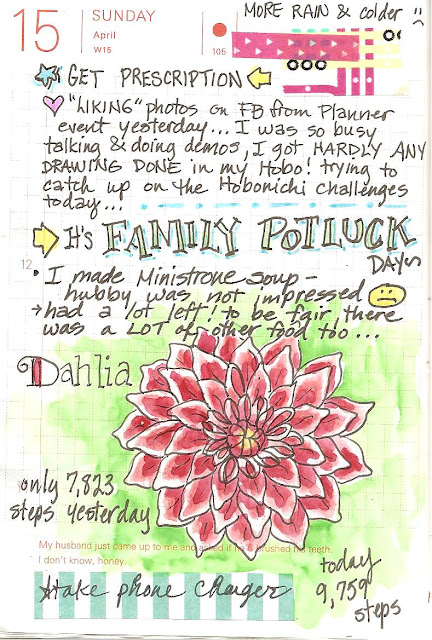 I love the loopy center petals that
aren't quite open. 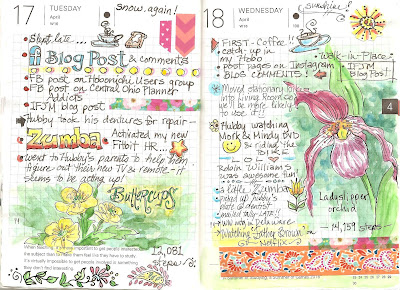 Wonky coffee cups for my beverage
today -- to link up with Bleubeard and Elizabeth,
for T Tuesday. 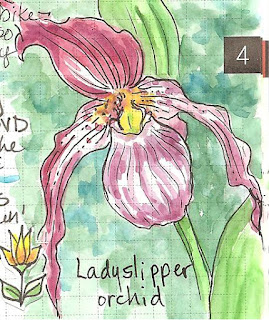 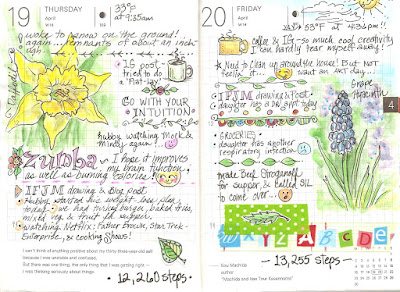 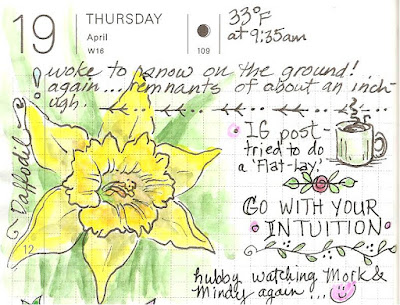 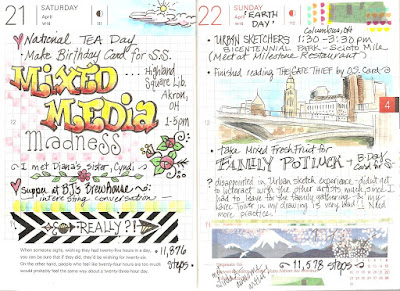 Went to my first ever Urban Sketchers event
on Earth Day, at Bicentennial Park along the
Scioto River in Columbus, Ohio.
Drawing buildings is a lot harder than I
anticipated! It's a beautiful park, and finally
the weather cooperated and was warmer!

I did a pen and watercolor drawing in an
8 1/2 x 11 sketchbook, spent about 2 hrs on it.
This little sketch in my Hobonichi is
about two inches high... 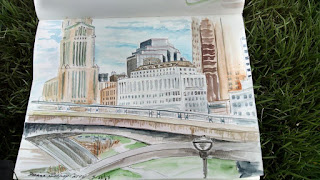 You can tell from the photo that the
proportions of my sketch are off, but it's
a learning experience... 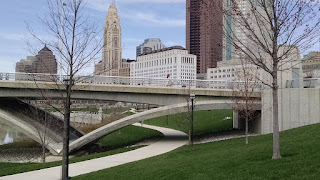 Having the photo to
compare to is helpful, and I could certainly
do another drawing from it if desired. 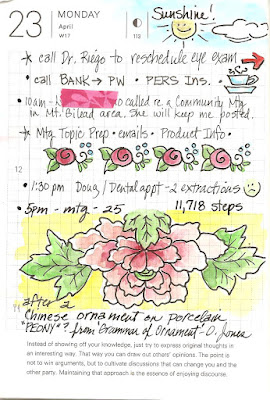 Still enjoying the flower prompts
of the Hobonichi Challenge
this month... 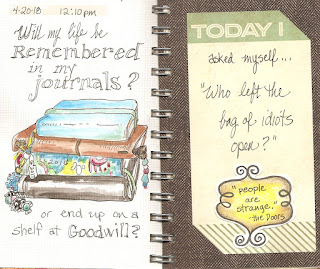 I've also been journaling as someone else for
the month of April, over at my other blog
Cottonwood Counterfeit Journal.  Stop by
to see what's happening there.

If you counted twelve beverage cups
last week in my post, you were right!

Have you ever noticed that the planning
for and anticipation of an event is
half the fun?  I agreed to do a
Doodle Demo at a Planner Event
in Columbus, Ohio
last week. I really had no idea what
to expect... 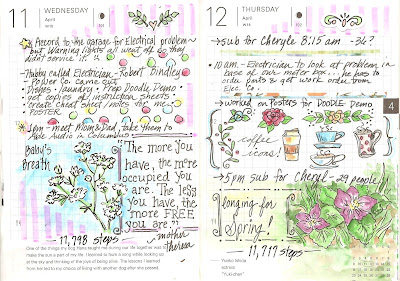 I made four posters with doodle designs
penciled in, so I could easily see the steps
to go through as I demonstrated. How nervous
would I be? Would anyone even want to try?
So happy that the group was enthusiastic
to try drawing!  I confessed that many of the
designs were straight from Pinterest (though
the Pins don't always give you a step-by-step)

The coffee icons were fun to do, but most of us
agreed that we make it at home. One person
asked about tea, and I did have a tea bag
drawing example to show! A couple of people
were delighted by the coffee and toast
doodles that I draw from breakfast. Toast
is pretty easy to draw... 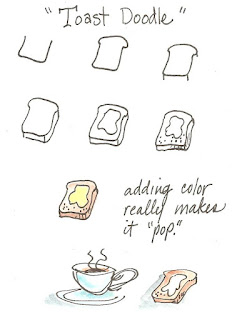 I think the really important part of the
Toast Doodle is 'dropping down' those little
lines at each rounded corner to create the
'thickness' of the toast. Add a few
lines to suggest the crust, a few dots
to suggest the texture of the bread,
and add color. It's gonna be
pretty small in your planner, and it's not a
fine art piece. It's just for fun! I did add a
couple little shadows in the last step with
gray watercolor. (make sure the shadows on
each item are on the same side)
And I'm ok with wonky and sketchy! 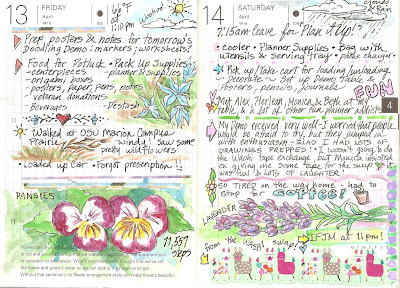 I feel that I need some new purple watercolor.
I'm not a fan of purple to begin with, and
mixing it with the colors I have seems to
really dull the hue and look muddy. I need a
'bluer' version of purple. I thought the violets
and the lavender just aren't the right color.
But I can live with it. 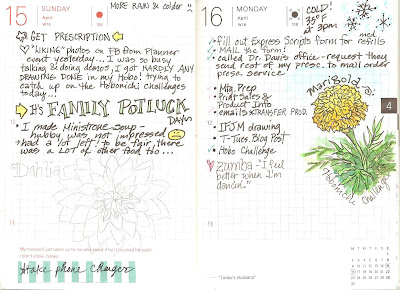 Above, is what happens when I'm behind
in my daily journaling. I make
notes on the page about what happened
that day, what got done, what didn't.
The drawings might come later.
Doodles may get added in later also-
even weeks later if I spot a blank space
that I think needs filled.

I hope you will try making some coffee
-or tea- doodles today. Thanks for stopping
by. Linking up with Bleubeard and Elizabeth
for our weekly T party. Join us for a
beverage and a chat!

P.S.  I think this might be a new record for the
number of cups in one post...how many did you see? 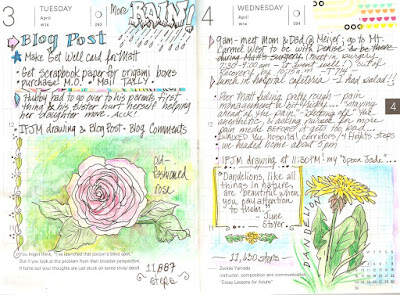 Flowers are blooming in my
Hobonichi planner this month. 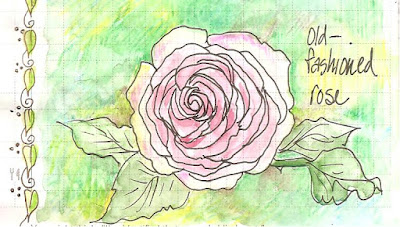 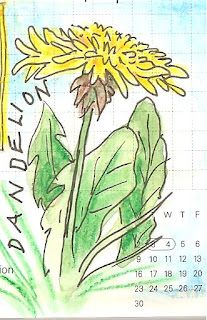 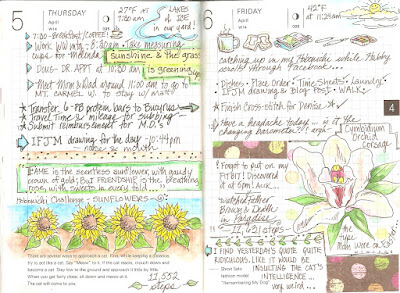 But the actual weather in Ohio has
still been cold. Mother nature is fickle. 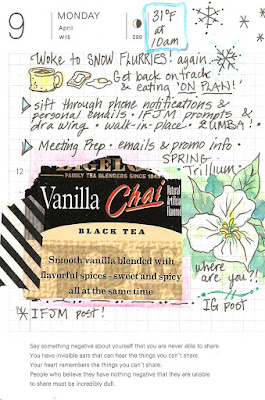 We are really tired of snow... 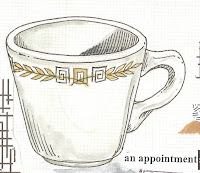 I'm working on another project this month:
International Fake Journal Month.
Stop by my Cottonwood Counterfeit Journal
to see what my fake character is
drawing.

Linking up with Bleubeard and Elizabeth
for T Tuesday. The vintage coffee cup is
a lot smaller than the mugs from which
I usually drink my coffee and tea!
What beverage are you drinking today? 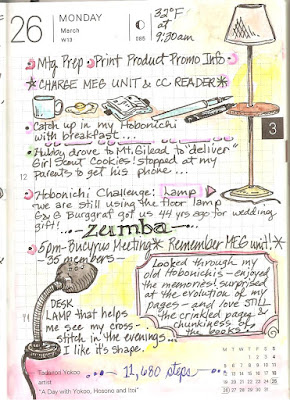 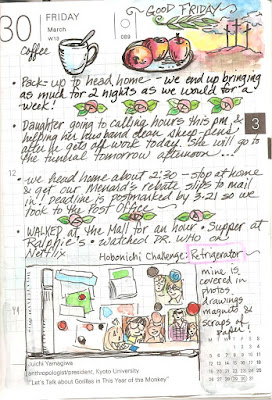 The March Hobonichi Challenge was
"Around the House."  Above, I've drawn our
refrigerator which is covered with lots
of photos, notes, and drawings by
grandchildren, as I suspect
may be the case in other homes also.
By necessity it's simplified, as the
drawing is about 1 1/2 inches high. 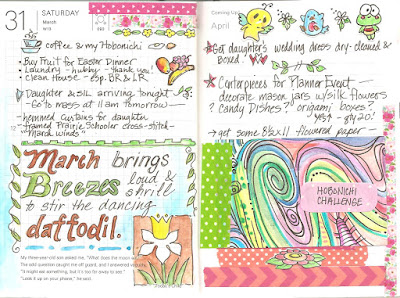 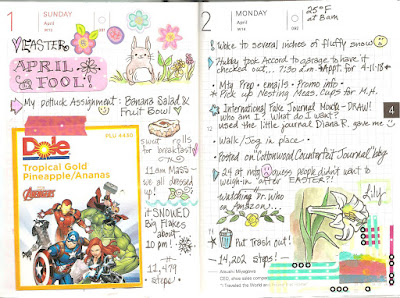 Our family enjoyed a very nice Easter
gathering and feast at my parents'
home. Always thankful when family
gets together. Loved the label from the
fresh pineapple that I bought for my
Easter fruit bowl! Maybe it's a bit
weird to have Avengers on the page
for Easter, but no stranger than Snow
on Easter!  Mother Nature had to
'spring' an April Fool joke on us
I guess...

I hope you will visit my other blog,
Cottonwood Counterfeit Journal,
to follow along in April for my
Fake Journal this year!

Linking up for T Tuesday over at
Bleubeard and Elizabeth's blog.
Stop by for a great tutorial about
rusting fabric!