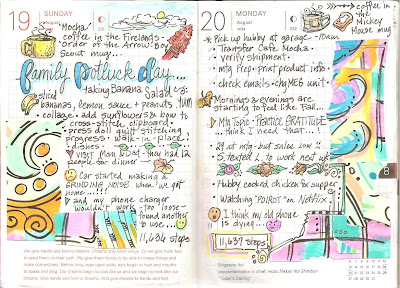 Sometimes it's a challenge to sit down and
create a blog post, because of being
busy or because of time away...
but wow....a whole month away!?
Time to catch up. 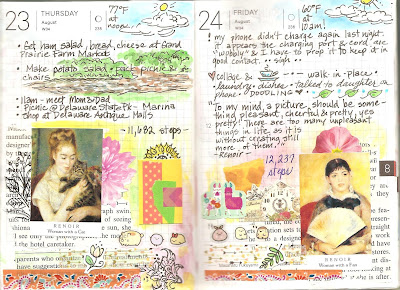 So it's a photo-heavy post today in order
to catch up with all our 'doins'. 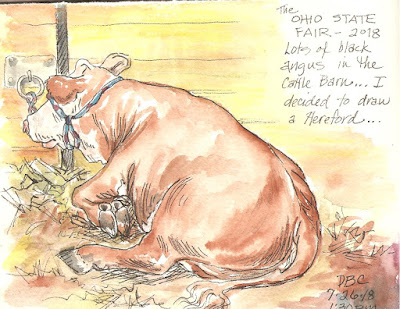 Had a nice visit to the Ohio State Fair,
where I sketched at the same time as
other members of Urban Sketchers Columbus.
I didn't really get a chance to spend any
time with the group, but managed to
touch base with them before everyone
headed home.

It was a really hot day, but I enjoyed
drawing in the barns, hearing the Ohio
State Fair choir and band, and having an
ear of corn on the cob! 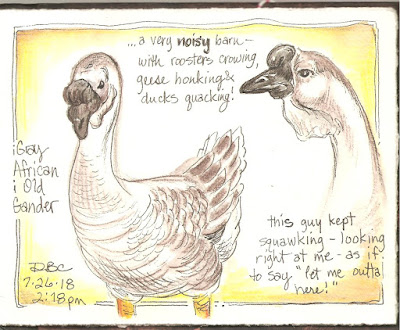 What do you do when you have half a page
filled, and then leave the fair?  You've got
half a page to fill when you get to the
next fair!  Below, I was surprised to see
that Fulton County, Ohio had procured a
piece of The Towers for a 911 Memorial.
It also happened to be a day when the
American flag was at half mast to honor the
passing of John McCain.  The flag pole
made an effective 'divider' from one
fair to the next.

Oh, did I mention the Tractor Pull on Friday
night? Hubby loves those events!
Daughter and I left him on his own
after a couple of hours...just a little more noise
and fumes than we could handle. 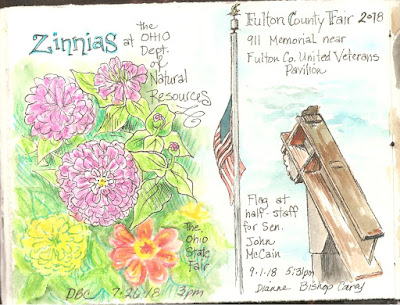 Daughter plays the djembe' with her church
praise band, and they played on Saturday
night.  She sang lead on 4 songs...very
proud of her! 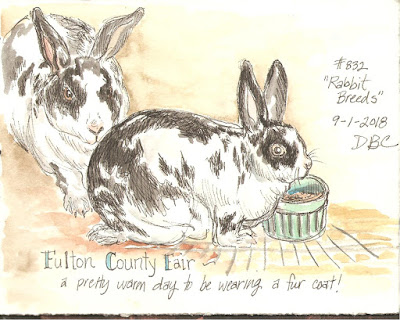 Fulton County Fair, near Wauseon, Ohio.
I seem to have an attraction to bunnies. 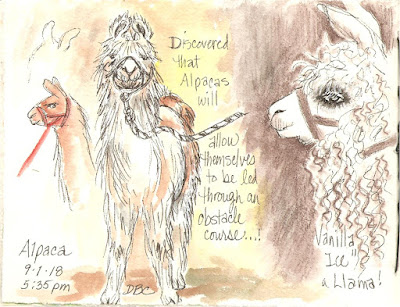 We also happened upon the end of a Llama and
Alpaca show.  They had been leading them
through an obstacle course.  Very interesting,
and the animals seemed quite agreeable to
jump low obstacles and even walk through
the flaps of a tent!  "Vanilla Ice" (on the right,
above) was a llama that was a creamy beige color
with long curly hair. He had one white eye and
one black eye.  His eyes had black all around
them like he was wearing eye shadow!  I think
maybe his 'nose' should have been longer in my
drawing, but he did insist on moving around a lot. 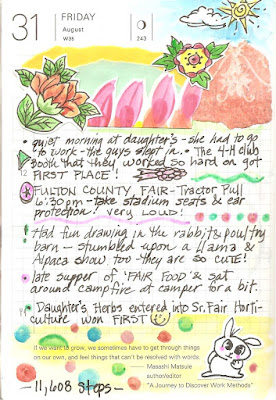 Daughter and Son in Law are 4-H advisors, and
there is always a big push before the fair each
year to plan and create the Fair Booth. The 4-H
members set up a booth in the Junior Fair Building
to showcase their projects and activities
for the year. As I was a 4-H member as a kid,
and so were my children, it brings back lots of
good memories. 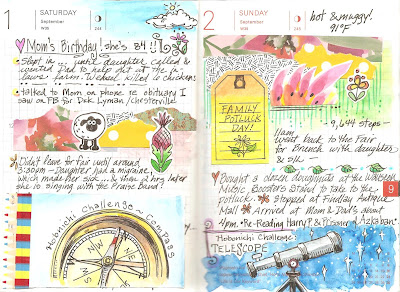 The trials of livestock and animal ownership...
something got into the chicken coop at the In Laws
farm and killed a bunch of chickens.  We suspected a
weasel or a mink.  Eight (or was it 6?) dead
chickens with broken necks, but left uneaten.
Apparently, whatever it was just killed for the fun of it.
Ugh. So bury the chickens and try to secure
the coop- which for a weasel means no
openings bigger than 3/8 inch! SIL was
pretty aggravated. Took them all day to apply
additional screen over the chicken wire. 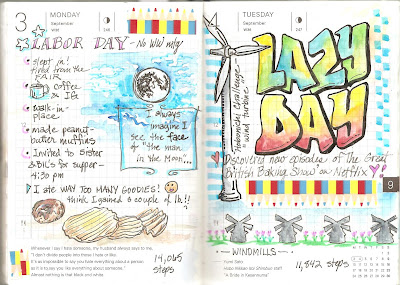 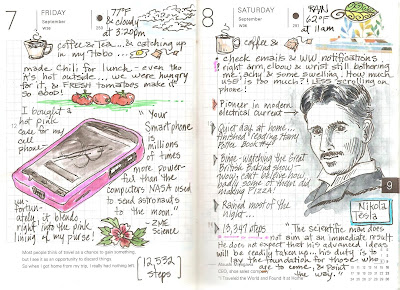 I'm back to doing the Hobonichi Challenge
this month, which is a theme of
"Experiment, Fail, Repeat,"  featuring
technology and inventions.  A good way to
reflect on science that has changed our
lives.  My grandparents lived in the era that
saw the invention of cars and airplane travel.
We are living in the Digital Age, and social
media is very impactful to our lives...
kind of scary to me to realize there is a generation
of kids that would not know how to use a
rotary phone or manual typewriter.
I'm showing my age! 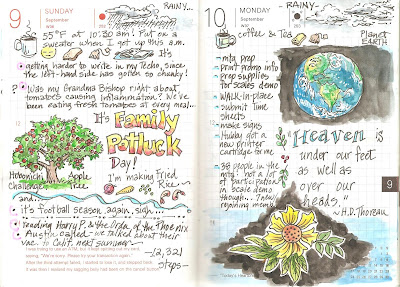 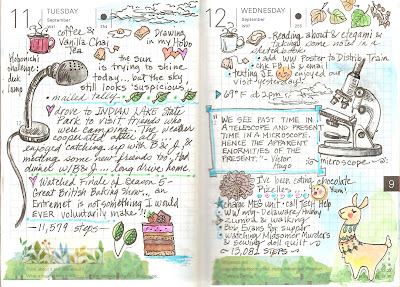 How many tea bags did you notice?
In addition to my coffee, I've been enjoying
some Vanilla Chai Tea in the mornings. So
I'm linking up for the T Tuesday blog hop
over at Bleubeard and Elizabeth's. It's
been a while, but it's always fun to have a
beverage and see what the blogging friends
are up to. Join us!

*There were six tea bags*

Dianne
I am a mixed media artist working primarily in collage, pen and watercolor. Visual art journaling pages are my current passion. I am also a weight-loss facilitator.

"As practice makes perfect, I cannot but make progress: each drawing one makes, each study one paints, is a step forward."